Symbiotic relationships and the wonder of Nature 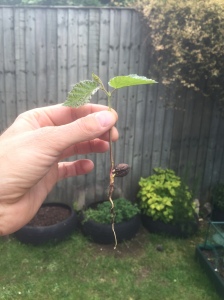 In so many ways, I find wonder in all that Mother Nature does. Things that often appear simple, are often in fact wondrously complex.

As a home-based worker in a small office with big windows looking out the back, I have quietly studied this garden of mine every day for the last 12 years, and for 12 years I have watched the squirrels take the hazelnuts from our hazel tree and bury them all over the garden. I regularly remove them from the lawn, the strawberry patch and the flower beds, and I feel pretty sure that if I hadn’t been doing that for 12 years, by now we would have no lawn, strawberries or flower beds, just a forest of hazel trees!

I pulled one out a few minutes ago, and was showing my kids the simplicity with which a nut is buried, the moisture in the soil soaks the nut, the nut opens and sprouts, puts down roots and starts growing a tree. Hazel is pretty fast growing, if I left this tree to grow, I reckon it would be bigger than me in just 5 or 6 years.

Pulling one out like the example here is a great illustration for my kids, showing how Mother Nature packages all the DNA for growing a 40-50 foot tree in one little nut! But the real fascination for me lies in the genius of the symbiotic relationships that must occur for this nut to go on to become a whole tree all on it’s own.

The mature (parent) tree produces thousands of nuts every year, the majority of which are taken by the large and active squirrel population in our garden (I guess we have them, because of the tree! Though they also compete with the birds for the fat balls and sunflower seeds my wife puts out!) But the hazel tree ‘knows’ that if it puts out enough nuts, the squirrel will bury a certain number and forget where it put them. In any given year, a few of these will take root and start to grow. I can assure you, from 12 years of experience, that if I didn’t keep pulling them out, our one hazel tree would easily produce at least a dozen successful ‘babies’ every year, thanks to ‘propagation-by-squirrel’!!

The ‘buried-by-a-squirrel’ technique seems to be infinitely more successful than the game of chance of just letting the nuts fall and lay at rest on the surface of the soil. So at face values, the squirrel would appear to be a ‘predator’ eating hazelnuts, yet in reality, the 10% of nuts the squirrel forgets about, are in fact the hazel tree’s greatest strength for ‘growing offspring’.

And the worms too. Soil is largely made up of worm poop. I read somewhere that in every cubic yard of unpolluted UK top soil (a cubic yard weighs about 1 ton) there are about 10,000 worms. Worms spend their day eating the soil and pooping it out the other end. A worm eats approximately it’s own bodyweight every day, and in the process of passing this lot through its gut, each worm increases the beneficial bacteria content of the soil by up to 14 times. This bacteria ‘fixes’ nitrogen in the soil, making it available to plant roots, to aid plant growth.

So the hazel tree would not propagate her nuts anywhere near as efficiently without the help of her predator, the squirrel, and those nuts would not grow without a bath of worm-poop all around, to nourish the fragile little roots it puts out.

And then when the tree grows, every year she drops her leaves. Rotting leaves, along with the decaying bodies of dead worms, dead squirrels, and all other decaying plants and animals, provide more nitrogen, phosphorous, potassium, iron, zinc, manganese, copper and other minerals and nutrients, as they compost down into the soil. The cycle goes round and round in an endless circle, eventually the new tree dies and it’s rotting trunk will provide a home for millions of insects, which will eat it, and pass it back to the soil, enriched for future plants to grow in that soil.

These are the symbiotic relationships in Mother Nature’s infinitely complex world that fascinate me. They say that every third bite of food the human race eats would not exist without bees. I think at least another third would not exist without worms, likely much more. And when we run out of crude oil…which we will, in 39 years’ time (see http://www.worldometers.info/ for this estimate) then what? Artificial fertilizer is made from crude oil – when it’s gone, it’s gone. We’ll be back to relying on the worms, so I think it’s time we learn more about the work they do to keep us alive and nourished.

No oil = no large scale intensive agriculture. Could that signal the end of the grain era on Earth? Without mass production of cheap grains, we cannot possibly sustain a population of 7.3 billion humans, let alone the 9.7 billion that the UN estimate we will reach in 39 years’ time. We have 39 years left to learn permaculture, to learn to farm in sustainable ways. We have just a few decades. OUR lifetimes people.

No trees = no oxygen
No topsoil = massive greenhouse climate warming (topsoil is earth’s second biggest carbon sink)
Polluted oceans = less carbon locked in oceans (sea water is Earth’s biggest carbon sink) and less fish to feed our growing numbers…absent of topsoil, fish will be by far the most abundant food source on the planet.
No worms = end of all plant life…could that then mean the end of human life? Can’t feed ourselves, can’t feed our farm animals?
No bees = half the human food supply gone (the healthiest half I might add!)
No squirrels = maybe no more hazel trees???

See what I mean about Mother Nature’s seeming simplicity, is actually the most wondrous, fascinating, web of complexity?
We really ought to stop messing it all up, and learn to support, nourish and foster these complex natural ecosystems instead.