My fastest run in 2 years 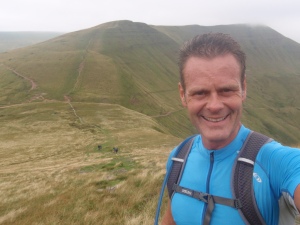 If you have read My Story then you will know that I enjoy running, and over 2009-2011 I ran a few marathons and mountain races. You will also know that I had to stop running near the end of 2011, in November, whilst training for the Las Vegas marathon, because of a persistent knee injury. The knee ended up needing surgery and I didn’t run at all, not even once, for a year from the end of November 2011 through to around about October or November time in 2012.

Since November 2012, I started running again, just a little at a time, building my running stamina back up.

A couple of weeks ago, late in August, I had my first ‘long’ run in 2 years. I enjoyed an awesome fun run on Brecon Beacons, running a total of 18 miles up and down, including a lot of climbing.

For those who know the area, I got from the car park at the bottom (Cwm Gwdi) to the top of Pen Y Fan in 43 minutes, which is pretty quick. My own PB for that is 39 minutes, which I ran in 2011. I then ran the whole ridge (all 4 peaks: Corn Du, Pen Y Fan, Cribyn and Fan Y Big) twice, dropping down into the valley between, all the way out to the reservoirs. Over the day (4.5 hours running) I summited Pen Y Fan 3 times and I felt wiped out by the end! Two years ago I could have done that twice in a day, but this time it left me exhausted!

So that was my first real long run. Today I ran my first proper timed fast run in two years.

I ran 5.32 miles in 38:53 min:sec, a circular route including two small easy hills. That is a pace of 7:18.5 min miles, not particularly fast, but definitely not slow.

I am pretty pleased, after two years off running properly, that’s quite a good run and I am happy.

Tags: Exercise, Injuries, Running, Sport
From: Exercise
← TEDx – where x is meant to = independent
Changing Body Shape – Burn off the fat, build the muscle →
No comments yet