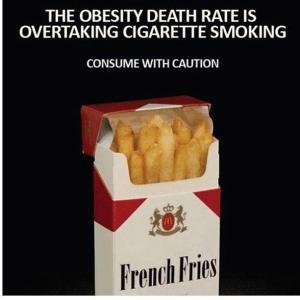 Health warnings started to appear on cigarette packs back in the mid-1960’s.

These warnings appeared in the more developed nations first, and later in the developing world.

By the mid 1980’s almost all countries insisted on such warnings.

These warnings and other efforts to promote the harmful effects of smoking, have led to a decline in the popularity of smoking worldwide and finally now, 40 years down the line, lung cancer rates are in decline in many nations in the developed world.

Worryingly, rates are still increasing in the developing world, where new found rising levels of wealth, the availability of cheap cigarettes and the slower uptake of warnings on packs, means that many developing nations are a decade or two behind the prevailing trend.

Amazingly, 1.3 BILLION people worldwide still smoke, despite the widespread acceptance of the harmful effects, obviously most notably lung cancer, which was the most common cancer worldwide for the last 30 years of the 20th century.

I wonder why so few people take good advice about their health while they are still healthy?

When they are dying in a hospital bed, their frail, weak bodies ravaged by sickness and disease, they want all the help they can get – drugs, surgery, vitamins, medicine, pills, doctors and nurses. Yet when they are young and healthy, they disregard any advice that might stop them from ending up in that bed in the first place.

Killing ourselves of our own free choice

There are more humans on Earth choosing to harm themselves through tobacco, alcohol and over-eating, than there are poor souls suffering ill health through a lack of food or water. What the fuck is wrong with people?

Labelling sugar and additives as harmful

Now I believe that foods containing refined white sugar, processed grains and chemical additives, should carry a health warning. Would it take as long for people to pay attention, as it has with cigarettes?

Here in the UK, the government have promoted “5-a-day” for about 20 years, pro-actively certainly for the last 10 years, yet on average, less than 40% of the population of the UK eat their 5-a-day.

So if the governments of some nations insisted NOW that food manufacturers start putting warnings on foods containing refined sugar, and chemical additives, and sodium nitrite (like in processed meats), then, if the example with cigarettes is anything to go by, it will likely still take the next 30 or 40 years before the current rising obesity trend and the rising diabetes trend, even level off.

However, such legislation looks many years, possibly decades away, as right now, people like me are still considered quack, renegades, extremists and outlaws. At the moment, Big Food companies are still actively advertising to our kids and filling our supermarkets and covering our billboards, and anyone who says they are evil drug pushers is seen as ‘way off the reservation.’

So, I (currently 42 years of age) can only conclude that these trends – rising obesity, rising diabetes, rising heart disease – are likely to continue for as long as I am alive.

Therefore, self-education and personal responsibility are the ONLY way we can guarantee our own good health in the future.

Don’t sit back and wait for government legislation. If you are aged 30 or above, it likely won’t come in your lifetime.

Maybe 50 years from now, everyone will look back and say “why didn’t they warn us about white refined sugar, white refined flour, processed grains, processed foods, trans fats, chemicals and additives…”